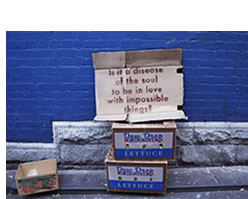 This series of text work manifests in three different forms: text stencilled onto discarded furniture, cardboard boxes, and a series of words made from magnetic material and wrapped around metal lamp posts.

These temporary interventions refer to stencil art and graffiti but without imposing an indelible mark on public or private property. In this sense it is also subverts the very nature of graffiti. Unlike graffiti the letters wrapped around the lamp posts can be re-ordered or removed by the audience and dumped furniture becomes a new kind of public space.

The work also mimics the conventions of advertising by using computer generated text and inserted into public places. The fonts suggest corporate branding and it only at a second glance that the content emerges. These interventions hopefully disrupt to the viewer’s acceptance of commercial interests as ‘ordinary’ in the natural order of the urban landscape.

This ongoing project started in 2005 and was originally posted on ilovestkilda.com. Until 2014, new work could be seen on the citytraces.net website.