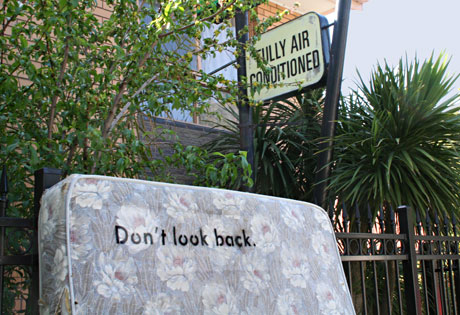 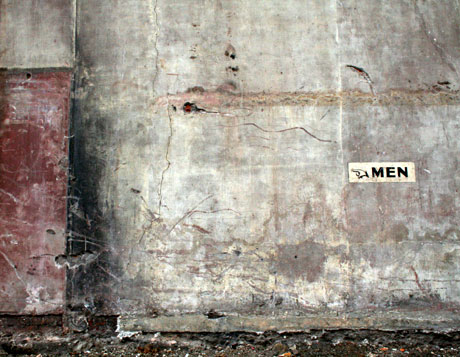 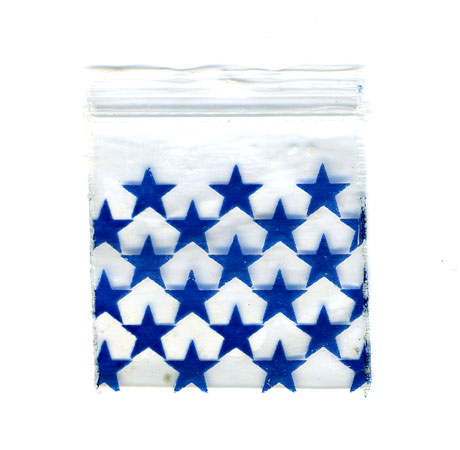 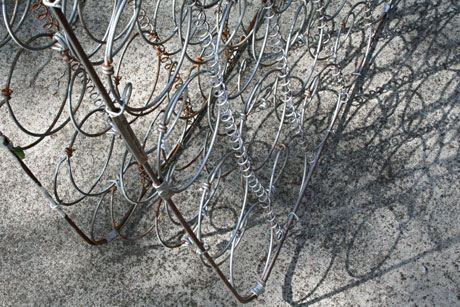 A black futon had been sitting in the street for days and J had plans to stencil it with a pattern based on the inner spring of a mattress. The stencil was taking longer to cut than anticipated, so rather than miss the opportunity she decided to throw an old wire carcass into the car and work direct from the original.

J drove around the corner and as she unloaded the car, a figure cloaked in an old grey blanket came shuffling down the street. When he saw the abandoned futon, he stopped.
As he started to lower himself onto it J quickly called out, “can you just wait a minute? I want to stencil that mattress and then you can sit on it”

As he made himself comfortable he gazed vacantly up from the object of their mutual desire and said “nice spray cans”. His hand appeared from under the blanket and picked up one of cans and gave it a quick squirt on the lamppost.

“It’ll only take a few minutes” she coaxed, “you could sit on those milk crates while you wait”, she said trying not to sound too bossy as she dragged a set of wire coils towards him.

“Is this your job?” he drawled.
“Well not quite”, she replied and started to outline the other aspects of her work. The more she spoke the more ridiculous it sounded.

“Have you got a match?” he asked while trying to light one butt end off another. As he moved his blanket fell open and a hole in his crotch revealed red angry skin.

“Ah no, no” she laughed nervously “I gave up smoking years ago.
Having trouble lighting your ciggies?” she asked lamely wondering what to say next.
Suddenly she noticed that this part of the street was quite isolated. Lots of back fences and a big block of flats, in an instant this really familiar space had become a badlands.
“Do you want to help me with my stencil, you can spray it too?” she said feeling stupid but gaining back some control.
He just shook his head and said “I’m going”.

As the blanket receded in the distance J got to work, the whole time keeping an eye on his progress. Looking up every couple of seconds. Then for no apparent reason he turned around and headed back towards her.

She quickly collected her three spray cans and kept them by her feet. “If he touches me I can spay him in the face” she reassured herself.

At that point another figure appeared.
“That’s coming on well,” said a friendly voice just as the human tent stopped where she was working. “Thanks”, she replied politely when she really wanted to shout “don’t leave me here alone”.

As the friendly fellow pushed on down the street, the blanket man changed position, into a half bend, half squat.

“What are you doing?” she said in a schoolteacher type voice. As he jerked upwards he stammered, “just scratching my leg” and with that he took off down the road.

Four hours later the futon was gone. The next morning it was back in exactly the same position this time there were obvious drag marks overlaying the silver marks of the stencil. 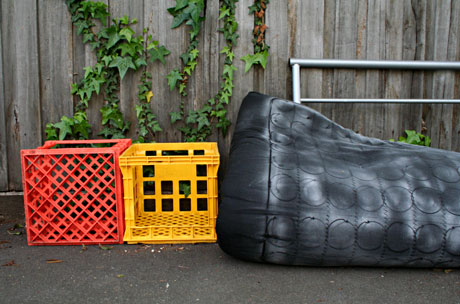 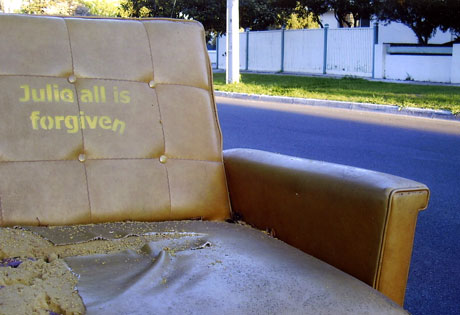 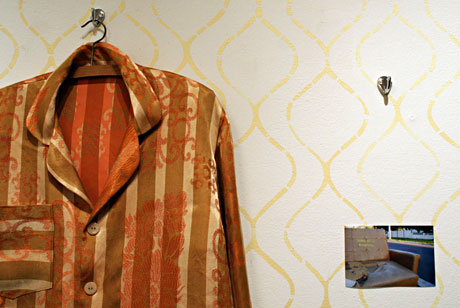 Whilst taking photos of the afterlife exhibition this photo was discovered hiding under one of the pairs of pyjamas.

What does it mean? Who put it there?
Does it have anything to do with returning a book? 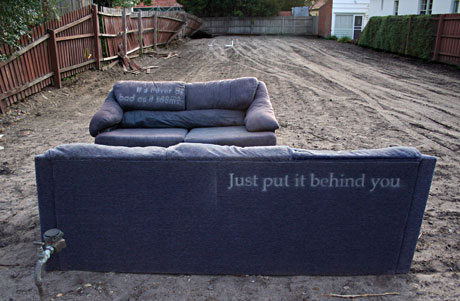 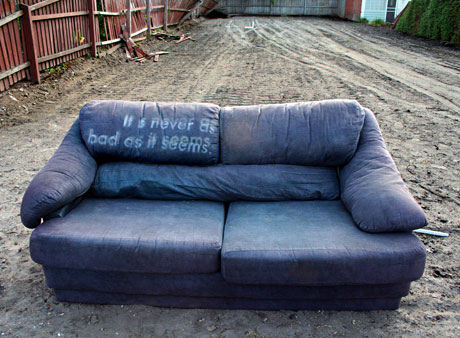